The 7 Amendments to the  USGA Rules Of Golf

1.  Improve Your Lie
According to a USGA study only one tenth of one percent of male golfers shoot par golf consistently. Only two-and-one-half percent are below a five handicap. Why do so few  golfers produce good results? The reason is clear, it's because the golf swing is impossibly hard!

It's very reasonable that most recreational golfers are frustrated by the game.  The traditional golf swing demands an extremely complex, unnatural swing action that can never be mastered. The body, arms, hands, club head and club face must be rotated on multiple planes in both the back swing and the downswing. These completely unnatural and complex rotary movements make it extremely difficult to square the club face consistently at impact, even for a golfer of the highest proficiency.

The margin for error in the golf swing is minuscule. A golfer is only allowed about two degrees of club face error when hitting a golf ball to keep it in the fairway. Not to hit it where it is exactly intended to go, but just to keep the ball somewhere in the fairway.  Unless a golfer is genetically blessed with world class tempo and timing and has at least 5 hours a day to practice, they can never hope to join the golfing elite who regularly play at par or better. For the vast majority of golfers not so blessed at birth, a frustrating fate awaits.

(a) The first rule of SortaGolf is to be sure to Improve Your Lie so as to give you the best possible chance to play your best golf. Golf is challenging enough even from a good lie. There's no reason for golfers to be further penalized by poor course maintenance or the randomness of nature.

Golfers instinctively know this and have over the years developed solutions of their own, like "bumping 'em in the fairway". Now this kind of progressive thinking can be expanded to almost every shot you play. The last thing you should be asking yourself before addressing the ball is, "Could my lie be improved?"

(b) Proximity to the original location of the ball should not be an impediment to this process. As a result, if it is necessary to move your ball a full clubs length in order to accomplish the task, then you should do so. This is especially true if a little extra distance will not only provide you with the optimal lie, but will also have the added benefit of allowing you to more easily avoid an obstacle (a tree, for example)or otherwise provide you with a better approach to your target.

Although, improving one’s lie cannot result in moving your ball closer to the hole or result in taking the ball from the rough to the fairway. The only areas of the course were this rule does not apply is in sand traps or on the putting surface. There, you must play the ball were it lies.

2.  Inside The Leather Is Good

Is there anything quite as irritating as missing a short putt? It's become an epidemic. The continual missing of short putts has been diagnosed to be an insidious disease, called the Yips, and according to the Mayo Clinic it effects almost half of all mature golfers.
Recreational golfers traditionally have treated putts "inside the leather" (i.e. a putt that is less than the distance from the end of the putter head to where the grip starts)as good.

(a) SortaGolf recognizes and reaffirms this time tested practice.   (b)This innovation significantly reduces the incidence of the “Yips” and virtually eliminates the embarrassment of four putts.

When putts inside the leather are treated as good it has the added benefit of speeding up play for everyone on the course.

Three million golfers quit the game every year, roughly 12% of the total.  As alarming is the fact that as fast as new golfers are joining the game, frustrated ones are leaving. It's the golfing industry's dirty little secret.

The source of this frustration is a lethal combination of slow play and the aggravation of posting high scores.

Nothing can ruin a great day of golf as quickly as slow play. Long waits between shots, groups backed up two deep at par 3's, all rhythm lost and over five hours to complete a round. More than half the respondents to a GolfDigest.com survey said that frustration over slow play has caused them to quit and walk in during a round. A day of fun is often turned into a trail of tears.

Equally frustrating is the very real risk of shooting a score far in excess of your ability.  Today's course layouts are fraught with risk and the arbitrary and punitive USGA Rules of Golf usually produce an unsatisfactory experience for the vast majority of golfers.  That is why only 23% of golfers strictly adhere to the USGA Rules of Golf and less than 20% maintain a USGA handicap.

The solution to both slow play and embarrassingly high scores lies in the concept of damage control.  What's required is a cap on the maximum score allowed for an individual hole.  This advancement keeps less skilled golfers moving at a quicker pace through the course and provides much needed relief for all golfers as needed.

The stroke AND distance penalties of the USGA are excessively punitive and therefore universally despised by golfers.  The idea of hitting a provisional drive or suffering the indignation of returning back to the tee box after determining that one’s drive is out-of-bounds are out of step with the realities of recreational golf, generally ignored and justifiably appear at the top of list of “most hated rules”.

There are penalty strokes in SortaGolf, but the administration of them is simple and clear. It's the "one-in/one-out" principle.

According to a Golf World estimate, over 2.5 Billion golf balls are lost worldwide each year.    Let's try to put that number into perspective:
With all that lost ball clutter is it any wonder golfers can't find their wayward shots. Nothing is more maddening than searching for a ball that you have hit in the rough, the woods or some other hazard and finding 15 balls, none of which are yours.

(a) With SortaGolf this is no longer an issue. Possession is 9/10ths of the law. So if you find a ball, then it is deemed yours, free of charge or penalty. A few tips are in order however…
(b) First, as a matter of courtesy, you should check to be sure the ball does not belong to another member of your group or another group on a parallel hole.
(c) Second, if you find multiple balls which are not yours, make sure to choose the one which is in the best position and replace it with the ball which is in the best condition.
(d) Finally, as always, remember to Improve Your Lie.

6.  All Equipment Is Conforming

There's been a lot of hoopla from the USGA recently about equipment. What's “conforming” and what's not.  It all seems pretty pointless when you realize that despite all the advances in golf equipment, the average score among recreational golfers hasn't changed over the last 50 years.  The average 18-hole score on a full-size course is 97 for men and 114 for women. Only a very small elite break 80 on a consistent basis.

Even more depressing, a golfer's scoring ability isn't likely to improve with experience. USGA research has shown that very rarely will a golfer significantly improve after playing for 3 years.

(a) With SortaGolf "anything goes" with respect to equipment. If some manufacturer is willing to make it, then it's okay to use it. Drivers with a "spring-like effect", "hot" balls that fly forever, non-conforming club designs, specs that exceed USGA mandates...you name it, they are all legal.
(b) Equally important, there is no limit (ie.14) on the number of clubs one may carry in their bag. Consider it amnesty for all recreational golfers.
(c)We agree with what Arnold Palmer said, "we should focus on people having fun playing golf and using the equipment they enjoy using."

7.  A Mulligan Per Round

Golf is a mental game.  And its clearly demonstrated each week by both Tour Pros and recreational golfers alike that how a golfer manages the stress inherent in the game is the primary driver of performance.

When stress in under control, concentration and self-confidence are optimized and the golfer is able to screen out distractions and play to their full potential.

When control of stress is lost as a result of heightened anxiety, too much adrenaline is poured into the blood stream and memory is interfered with: you literally forget your training. "Choking" is just another word for an uncontrolled stress reaction. Golfers need a mechanism to better cope with the stress inherent in the game.

Mulligans emerged as a grassroots movement among recreational golfers because they have the unique ability to provide golfers with just such a stress reducing cushion.  And anytime we have a cushion with a potential to re-do something, there is less stress.  And less stress, from a biochemical perspective, leads to better performance.

(a) In SortaGolf, the Mulligan is encouraged and seen as a vital part of the golfing experience.
(b) A Mulligan can be exercised on any hole on the course but only from the tee box.
(c) and are limited in number to one per round. 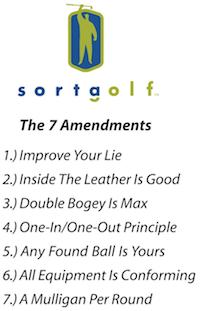 The Book The USGA Doesn't Want You To Read

Promote Your Page Too